England Hockey bounces back thanks to ProPlay

England Hockey experienced an unprecedented demand for tickets in the FIH Pro League ballot and decided it would be best to move the men’s and women’s double header to a bigger venue. The management of the Twickenham Stoop stadium was willing to take up the challenge and allowed the home of the Harlequins Rugby Club to be temporarily converted into a hockey arena.

Twickenham Stoop in south-west London is actually a rugby-specific stadium. Players for both the men’s and women’s rugby teams of Harlequins RC can be found practising and playing at this venue on any given day. However, its location, layout and capacity were very appealing to England Hockey who was in dire need of a bigger venue. Demand for tickets for the inaugural Pro League game against New Zealand had quickly exceeded expectations and signified an unprecedented interest. The 14,800 capacity of Twickenham Stoop would be perfect for accommodating the thousands of fans who had already applied for tickets, while the stadium’s infrastructure would also support England Hockey’s plans and ambitions had to further promote the game.

Hockey surfaces are expected to be absolutely flat and stable to assist in keeping up the quality and speed of the game. Much of this is achieved through the artificial grass carpet. The performance of the field is complemented by adding water to the pitch. Water in between the blades improves the ball roll and enables players to slide comfortably. In the past each watering of a field could require up to 18,000 litres of water but, aware of the implications this could have on the environment and sustainability of the game, the FIH has been on a drive to reduce the reliance on the precious resource. As FIH Global Partner Polytan had developed Poligras Tokyo GT, the first hockey surface made from 60% renewable resources, that uses 2/3 less water per watering, it was up to the shock pad and subbase to complement the surface. These components are expected to provide the much-needed stability of the surface and should help preventing the surface from drying out during hot summer conditions, or getting water-logged when conditions are rainy. The combination Polytan and Schmitz Foam Products is easy to understand: the companies have a longstanding relationship for sports surfaces and are quality brands that complement each other. Over and above, the field should be a temporary structure that could serve another purpose once the FIH tournament at Twickenham Stoop has been concluded.

From natural to artificial

The field at Twickenham Stoop is a natural grass surface and is the pride of the venue and the club. For England Hockey to successfully host an event, they would have to think outside of the box and be willing to surround themselves with partners eager to make things happen.

Water management specialist’s suggested the use of a geocellular subbase on a permeable geotextile. This subbase has the advantage of creating a stable, high-quality base that answers all needs for the top surface. It also has sufficient capacity to store water coming from the pitch before it enters the drainage system.  Once the geocellular subbase was completed, a ProPlay shock pad was installed on top of the structure. This specifically-developed shock pad is known for its lasting shock-absorbing capacities. England Hockey and FIH were also impressed by how rigid the shock pad is. This shock pad for hockey has a higher than average thickness and density to ensure maximum performance in terms of the game and management of its permeability. ProPlay is made of thermal bonded cross-linked polyethylene. It has a closed cell structure and as such, doesn’t absorb moisture. Instead it allows the water to flow freely. The microbiological resistance of the shock pad is in line with quality standards defined by the EN 12225 standard. 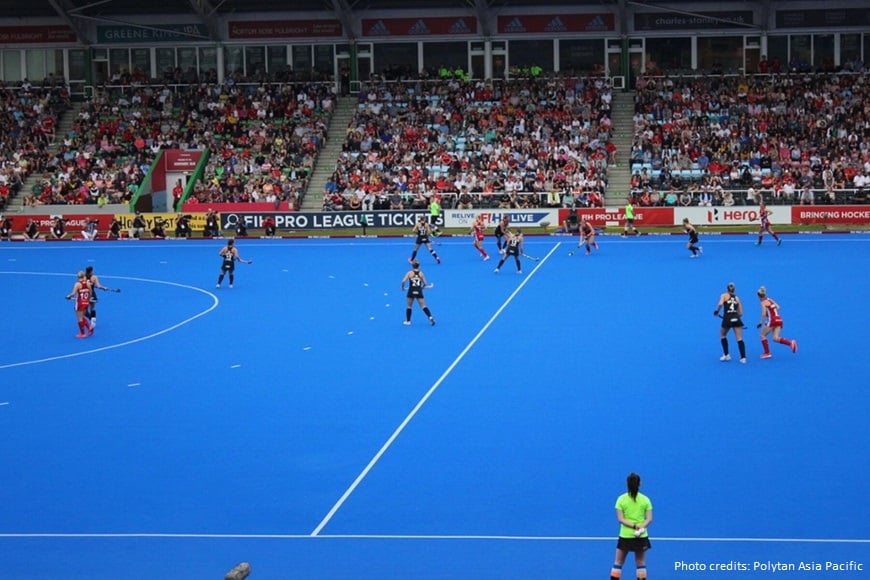 From the outset it was clear that the hockey field at Twickenham Stoop would only be there temporary. However, the organisers made it clear that they were only willing to accept items and materials that would allow for recreating a field quickly and cost-effectively on any scale, in any location and on any existing surface. ProPlay fully complied with these requirements. The size and distinctive puzzle-shape of each piece allow for the quick installation and dismantling of fields. As Schmitz Foam Products has been producing these panels for close to 30 years, the performance of the panel is guaranteed for 25 years minimum. Thanks to the well-engineered production method used for producing ProPlay, panels that have reached the end of their useful purpose in sports fields, still have a life ahead of them when used in other applications. The two games at Twickenham Stoop hardly affected the panels, so the organisers of the game can also opt to store the panels until the next need for a temporary surface.

The game at Twickenham Stoop can be considered a huge success in many ways. Both the men’s and ladies’ teams bounced back into the competition by beating their opponents from New Zealand. Having the support of close to 14,000 spectators certainly will have made a difference. However, what matters most is that England Hockey has managed to offer hockey fans a new and different experience. By embracing the latest technologies, England Hockey and the FIH have managed to revolutionise the spectating profile of the sport.  ‘Those who dare to think differently will quickly realise that the sky is the limit. ProPlay shock pads provide a quality surface in any given circumstance. They will certainly provide a safe landing for even the most innovative systems and technical challenges,’ Rob Moors of Schmitz Foam Products concludes. 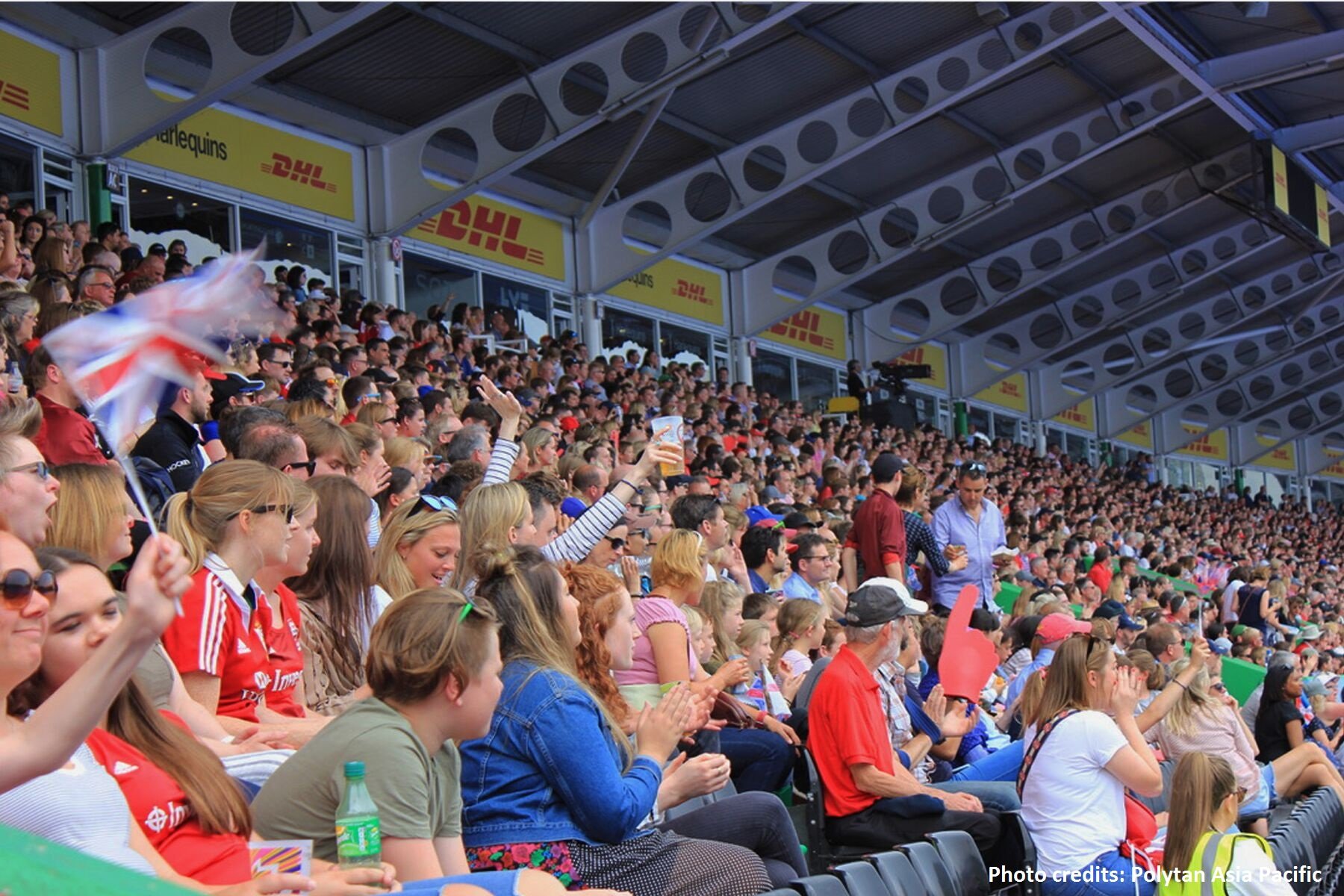 The chief executive of England Hockey, Sally Munday, went on record saying ‘This will not just be game-changing for us, but for hockey around the world’. Instead of using temporary structures to add a few seats extra to venues with an already limited capacity, the approach England Hockey took for hosting the FIH Pro League game shows that hockey games can also be hosted in even the biggest venues. ‘

Back to 'Success stories'

Curious to see more from us? Our shock pad is applied in more than 70 countries...

Are you looking for a shock pad for your quality artificial grass system?